Google employee John Mueller said that mentioning a brand without a link is usually not considered by a search engine as a signal of trust and does not directly increase the rating of the brand that was mentioned. 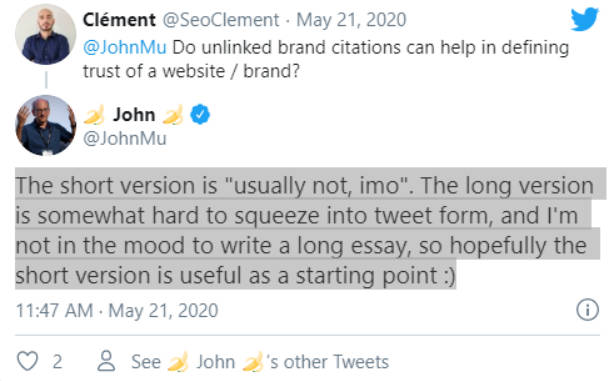 Google doesn’t take into account as a trust signal a reference to a brand without a link.

John Mueller’s short answer was, “Usually no, I think.” Then Mueller added:

The long version of the answer is quite difficult to squeeze into tweet format, and I’m not in the mood to write a long essay, so hopefully the short version will be useful as a starting point.

He hinted that SEO could check his statement.

In 2013, Google has already reported that it does not use un-linked mentions for ranking, but can use such mentions to detect brands and sites.

In the comments of the publication Search Engine Roundtable controversy flared up. SEO-specialists began to give examples when mentioning a company without links triggered it in the plus.

In 2018, references to our brand without links were massive. We were mentioned in stories that were published by the New York Times, Chicago Tribune, Washington Post and other publications. Almost immediately within a few days, our organic traffic increased significantly. Our tiny brand appeared on demand in very competitive niches and in specific marketing terms at the top, bypassing major sites. It only lasted a few months, but I’m 100% sure it’s the merit of the references …, – wrote one of the users, saying that they were not involved in linking or off-site SEO.

In response to this, another specialist noticed:

I bet that since there were no links, people entered your domain. I believe that the search by domain is a kind of rocket fuel for the site. Putting in a domain gives you a powerful push that raises you up, but if you don’t support it, you fall back to the ground.